I just completed this little project. Well, little may not be the most accurate description seeing as it stands two feet tall and lacks only one pound of weighing twenty.

The inspiration began with the little boat I bought from a lady in the “Lowes” parking lot a while back — and while piddling around the back yard with extra time on my hands I spotted an old swimmers platform weathering away on the back of my real boat. It made the perfect fishing pier

for the “Old Salt” and his dog to mend nets and spin tales of fish lore and Mermaids on.

What do ya do with that? I mean it’s a “Paisley Telecaster” but, not exactly something “James Burton” would play. I’m not even sure “James Taylor” or “Rick James” would play…Maybe “Prince?”
Anyway, I know it’s a girly guitar, and the flowers are — well, pretty. But I just can’t see me playing it the way it looks, so, I guess it’s in for a face lift… Hmmm. What to do? What to do?.. It is still a Telecaster, after all…I wonder what the stage lights might do as far as improvements?

Yeah that’s a little improvement. By the way, can you guys believe Russell Wilson threw that last pass instead of giving the ball to Marshawn Lynch? Maybe a little blue light…

Oh wait.. I see it now.. I know what it needs… and I wont have to strip it down to find it has an ugly wood grain underneath…
Man… what a way to blow a ball game…’COME ON MAN’!

So, I suppose I need to make a trip to “Hobby Lobby” for this project… I have an idea to save the guitar. I don’t think I’ll go with any of Pete Caroll’s plays on this project. Nor will I bother to paint, or strip the guitar down… I think I have an idea… I should have it finished and posted before too long, later this week. Until then… “Dolt!  Ummm Flowers.”

And seeing as I gave the guitar to my grandson for Christmas, I’m lucky I

Not the best pictures in the world, but, at least I did take a few.

The morning sun shone through the rift of the blinds one morning, and my semi-conscious mind must have processed the red-eyelid-grid it saw as the fret-board of a cosmic stringed instrument. I began hearing the most beautiful music I have ever heard, as my mind’s eye watched each glistening sun-ray pluck the strings. I remember being astonished by its dexterity, and melodic perfection. Upon awakening, I tried to duplicate the notes I had heard, and saw, on my guitar—If only I could remember them note for note.— From what little I was able to remember, and attempt to simulate on the fret-board, the notes seemed impossible to play in one key. Almost as if each note came from one of the 24 individual keys of the musical spectrum. It totally seemed to of been an impossible dream— But, what if all dreams came true?  I thought, and then it was gone…

I heard the phone ring as I was walking in through a large glass door leading to a hallway between two rows of desks occupied by dogs with huge human like grins, when suddenly one of them leaped out at me and said…     “You Won The Lottery”  —  But, then, of course, I woke up.

I dreamed I was in a terrible hurricane, worse than any of the ones I’ve experienced first hand on the Carolina coast. It was terrifying. Water started moving in beneath my feet, and gradually rose to the level of my chin. Suddenly, a tidal wave came crashing over me, the town, and everyone, and everything, as far as I could see. And, then I woke up — But, what if every dream really did come true? Or. What if some really are warnings? What if we knew that every dream would come true? What If every dream did come true?

There are lots of interesting summer getaways across the Southeast, and the southern United States. And though I’ve yet to vacation, or even visit many of them, I have indeed seen my share of resort areas from Florida to West Virginia, from the mountains to the sea. For me, however, a Nature, History, and Native American enthusiast, few hold as much intrigue, as “The Village At Indian Springs.”

Replete  in early American history, dating from the Pre-Revolutionary, war era, Indian Springs, was held sacred among early Native American tribes from Alabama, to Canada, as well as from Carolina to Mexico. It had its skirmishes in the Civil War as well.

Today, It’s a must-see getaway. A memory making experience one will relive for a lifetime. And, with

The Village At Indian Springs offering everything from clean, comfortable, accommodations, and shopping conveniences, is the perfect place to spend an exciting, fun-filled family vacation. In fact, with nine different “Wedding Venues” to choose from, it’s a great place to start and raise a family.

Indian Springs is located just minutes from the Butts County, county seat, of Jackson, and I-75. Sort of a “Touch of Country” in the city kind of town, only without all the traffic and noise. There are two nearby state parks, including the oldest state park in America, Indian Springs State Park, and many lakes and falls.

Geographically, Indian Springs sits almost precisely in the center of the state of Georgia.

And, like a scene from a Norman Rockwell painting, sitting wonderfully, quietly, nestled between the rolling hills of southern Appalachia, in the Piedmont area of the state, is a cozy stream valley resort called: “The Village At Indian Springs”

“The Village At IndianSpring’s”shops include, but aren’t limited to the  following services, and locales.

Visit The Village At Indian Springs @

The Village At Indian Springs.Com

I’ve always wanted a Sea Foam Green, or Surf Green guitar,.. and, as luck would have it… I had the perfect suspect just waiting to hang- ten Yes… just one more too many (IMO) “Black”  Stratocaster Guitars.

While researching for the project, or, “Surfing” the Web… pun intended, I learned there was a whole new genre of music circling these rare, highly  sought after vintage colored guitars. 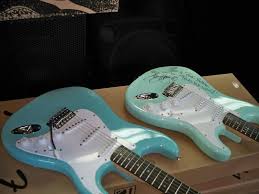 Actually, it’s not a new music genre at all, but re-emerged phenomena called “Surf Music“

The“Surf” sound – began on the beaches of  Southern California circa 1963, and was all but “wiped out” by ’67 by the-“British Invasion” of pop and rock groups, with styles such as the Beatles, the Stones, the Animals, the Kinks, and Gerry and the Pacemakers… to name a few.  Although the colors, Sea Foam Green, Surf Green, Bahama Green, and their variants go back to the 50’s, “Surf Music” didn’t officially wash ashore until the  60’s. 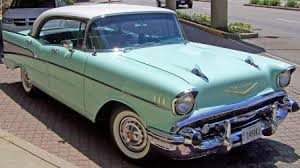 No need to bore you with the whole paint stripping process, so

without further ado here’s my version of  a “Surf” Guitar.

These photos, of course… were taken in the closet… during the drying process.   (Temps were much warmer there.)

As far as the actual color they vary depending on the manufacturer — Going by the Fender Color Chart the one I chose is probably more of what they call “Ocean Turquoise.”

It’s probably no secret that great guitars aren’t born of  vintage aesthetics shiny hardware, and pretty paint, but, more from its tonal properties, and playability. Which is why I ordered a new bridge, and block tremolo assembly, and added the Custom made Canadian Rock Maple neck, with Celtic Cross inlay,( for a little added eye-appeal), and a new set of    “Fender”  staggered machine head tuners.

I’ve also entertained the possibility of replacing the original pickups with a more vintage type, such as the Gibson P90’s, or a variant, known for their crisp, clear, punch attributed with “Surf” music, but, after re-wiring everything, double grounds, and shielding, the original bridge position double humbucker pickup seems to “Surf” on its own, and the neck and middle position “pups” have a sweet sound of their own as well.

Here the project is still in its beginning stages… erm, well with me… nearly ALL modding projects are never-ending. It’s a lot like writing songs…

Anyway…Oh, also I couldn’t help but add a little artificial ‘Relic-ing” on the body when I was painting it. Relic-ed guitars are almost as big of “The Latest Craze” as are “Surf” green guitars, as seen in the pictures of this brand new Fender pictured below. A real bargain at only $6,499.99 bucks… and yes, I said a brand new guitar. As seen here:  themusiczoo.com

Geez, now that everybody wants a “Surf”, or “Seafoam Green” relic-ed guitar…maybe I no longer want one so much…

Oh but it sounds so good

You’ve got to admit — even with my personal faded relic look…it’s an improvement over…One more “Black” Stratocaster-right?
Cheers